Before My Due Date

I started getting contractions on August 2, 12 days before my due date. I was so excited, and after they had been happening for a few hours, told my mom and sister that I was having them just in case we wound up at the hospital that night. I went to bed early trying to get sleep for what I thought would be labor, only to wake up the next morning with them gone. 12 hours of contractions for nothing. I felt defeated, disappointed, and frustrated. Not knowing when our girl would be joining us was so frustrating to me this time. Probably because we had a huge fall launch scheduled for August 15th and not really being able to plan for that around her arrival was rough.
When I talked to my doula, she assured me prodromal labor was common especially for second time moms and that I would likely go into actual labor within the next few days (but not to be mad at her if I didn’t).

A week goes by and still nothing, and by this time I was so done being pregnant. My back hurt, I would get random shooting pains up my back when waddling, and I had been waddling for weeks. With Posey I had felt so good up to just the last couple of days, so this was different and so hard for me.

Saturday morning the 10th, contractions started again. I was cautious this time though, thinking prodromal labor was here again to trick me, so I waited and waited to make sure it was real. Contractions definitely were stronger than the week before, but were far apart and weren’t getting any closer together. I assumed it was nothing, and we went about our day as usual, I went to bed once again feeling frustrated that it wasn’t happening.
I woke up around 3am from contractions that were now strong and I couldn’t sleep through them. I was relieved and scared at the same time. It was happening – but was I really ready?

I let Russ sleep since I assumed it would be a long day ahead of us and wanted him to be rested. I bounced on the yoga ball in our room with Jack Johnson playing and the light of our Himalayan salt lamp nearby. It was so peaceful and I actually enjoyed that time just thinking about Golden’s arrival.

At 5am Posey woke up screaming and Russ went in to be with her. By 6am contractions were pretty intense (though still 7-10 mins apart) and I felt like I needed Russ with me. I called my doula and my mom to come over to be with Posey so Russ could be with me.

Posey and my mom came out of her room around 7 and once Posey was around my contractions slowed way down and I had a hard time focusing. After having some breakfast and watching Strawberry Shortcake (the 1970’s version which is the only thing she would actually sit and watch) I had asked my mom to take Posey to her house.

Around 8 we had the house to ourselves and my doula encouraged me to walk, so I just walked in circles around the house, wanting to stop when contractions came but she encouraged me to walk through them. The contractions were intense but still 7-10 mins apart and I felt like they would never get closer together and maybe this really wasn’t actual labor since they weren’t getting closer together. She said as long as they were getting stronger the timing didn’t matter. I held onto that. She kept saying trust me, it’s like there’s a switch that will flip and all of a sudden it will be time. I didn’t really believe her at the time and just kept walking and hoping things would speed up.

Eventually she asked if I wanted to rest on the couch, so I did. I think I may have fallen asleep and was woken up by the strongest contraction I had ever felt. When it was over I got up and contractions kept coming super strong and way closer together- I couldn’t walk through them anymore. By 10 contractions were very intense and we decided it was time to go to the hospital.

Heading to the Hospital

Walking just from the couch to the front door I had to stop 3 times for contractions and I was making noise through them to get through. We got to the hospital but hadn’t taken the tour for this one – we were supposed to deliver at a different hospital and insurance changed all that so we got lost finding the labor and delivery area. (It’s funny now, not funny then.) I asked to be in a wheelchair because I knew I couldn’t walk to wherever we had to go.

We finally found the correct elevator and made it to the labor and delivery area where they asked me to sign papers. I’ll never understand this process since I literally couldn’t read or concentrate on anything since I was HAVING A BABY, but yes let me sign that.

We got into our room and I just remember asking over and over to get in the shower. With posey it helped slow contractions so I could catch my breath and it’s all I wanted. The nurse wanted to monitor me and baby for 20 mins before. I went to the bathroom and could barely get up with so many contractions happening but eventually made it back to the bed so they could monitor us. She checked me and said I was a 7.

I kept asking for the shower and the nurse said she had called our doctor and she didn’t want me to take a shower since my water could break at any second and she felt things would go quickly after that. I was devastated. I couldn’t keep going for hours and hours and needed some relief. The contractions were more painful than Posey’s and I literally couldn’t handle it. I asked my doula for the epidural (never asked with Posey) and she said, I think we are a little past that point.

Shortly after, the doctor walked in and I was kind of confused. I clearly didn’t realize how close we were to meeting our girl even though everyone else knew.

Every contraction I had to hold on to Russ to make it through. At one point it was so intense I was losing control and my doctor said, “Haylee, find your breath” and that simple sentence made such a huge difference. At some point my water broke like an actual water balloon and I apologized to people in the room because it definitely felt like it got everywhere

Shortly after I said my body wanted to push. So my doctor said, “It sounds like you want to push, so go ahead and do that whenever it feels right and you can be in whatever position feels good, but you will have to open your legs wider for the baby to come out.”

I love my doctor…she was so casual and just let me do whatever felt best. She also delivered Posey and had come in for Goldie on her day off after working a 12 hour overnight shift.

After just 2? Maybe 3, pushes Golden was here. I actually grabbed her and pulled her up to me when she was only halfway out because I just wanted the pain to be over. The ring of fire was SO intense and I didn’t have that with Posey at all.

11:44 was her time of birth. Just 1 hour 45 minutes after we left our house. Only 2 hours and 45 minutes after I was doubting whether I was in real labor or not because my contractions were still so far apart.

She laid on my chest for a while, but they wanted to check her because she sounded like she had fluid in her lungs still. They decided it would be best to take her to the nursery for constant monitoring and to give her some oxygen to help her clear the fluid and get her heart rate down. Russ went with her and they had me wait an hour for observation then I joined him.
It was weird, if that had happened with posey I know I would have been anxious and worried and upset. But I was calm. I think I was just in shock that she was really finally here, it happened SO fast. It almost didn’t seem real.

My mom and my doula, Mallory stayed with me. We talked and Mallory said at one point while we were lost she thought we may end up having the baby in the elevator. She also called my mom as soon as we left our house and told her to get the hospital right away.

I thought both of these were so funny because again she knew Goldie was coming quickly and I was oblivious and assuming I had hours of labor ahead of me. We were at the hospital for 10 hours before Posey was born so in my mind that’s what would happen again.

I was also able to walk on my own, which would have literally been impossible after Posey’s birth. Recovery was so much easier this time and I was extremely grateful for that.

Mason and Posey were able to meet her later that day. Posey was more interested in her snacks than baby and Mason loved holding her. He said, “My arms are getting tired,” so my sister went to take the baby and he said, “No, I’m not done yet, just my arms are tired.”

One thought on “Golden’s Birth Story”

This site uses Akismet to reduce spam. Learn how your comment data is processed. 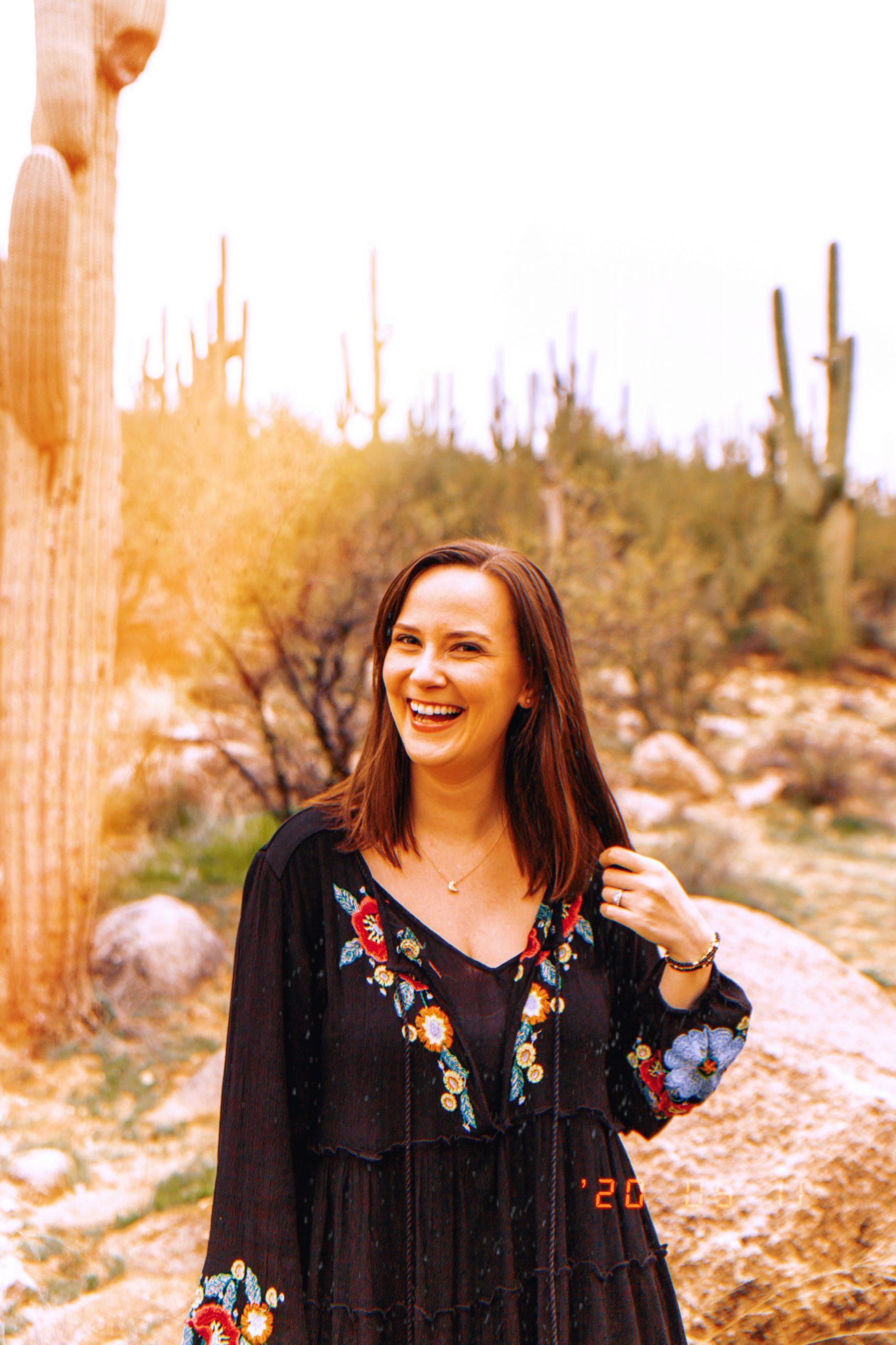 Life is like a box of. . . crystals (which are bet

Ready for allllll the crystals?⁠⠀ ⁠⠀ In or